Tasmania, Australia’s spectacular island state, has long been overlooked by international travelers. Those in the know come here for the empty white sand beaches, world class hiking, a superb farm-to-table food scene and a calendar filled with travel-worthy festivals. Explore it on this virtual tour. 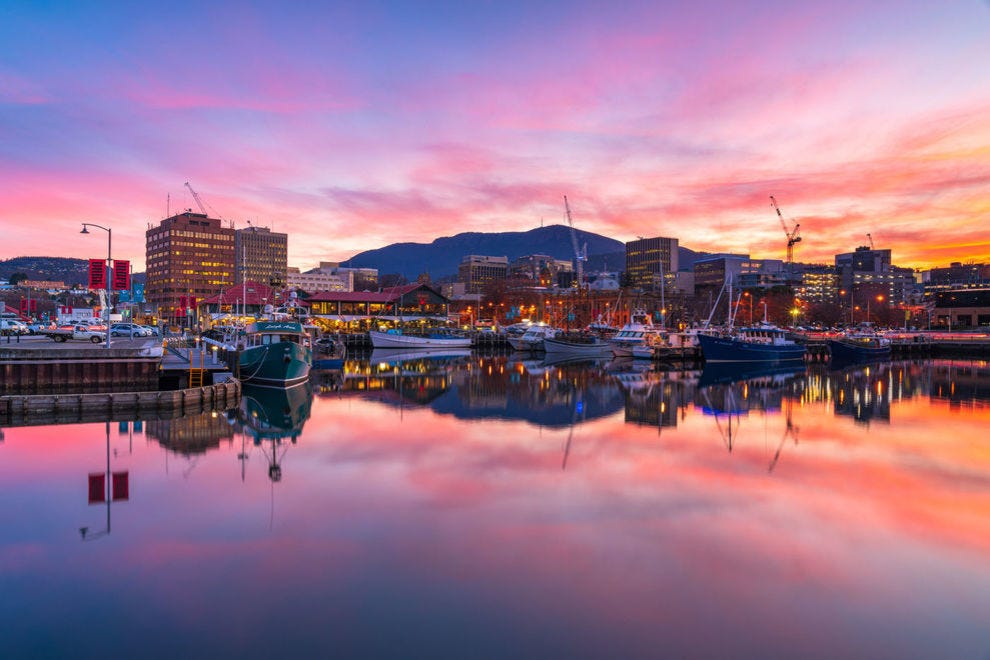 Hobart, the capital of Tasmania – and second oldest and smallest capital in Australia – has a lot going on for a city of just over 200,000 people. Head to the waterfront to enjoy seafood pulled straight from the ocean, admire the modern art collection at MONA or soak up the lively atmosphere at the Saturday Salamanca Market.

The 20-minute drive from Hobart to the summit of Mt. Wellington takes visitors through temperate rainforest to the sub-alpine peak. An open viewing platform offers one of the best views in all of Tasmania, overlooking the city of Hobart, Bruny Island and the Tasman Peninsula. 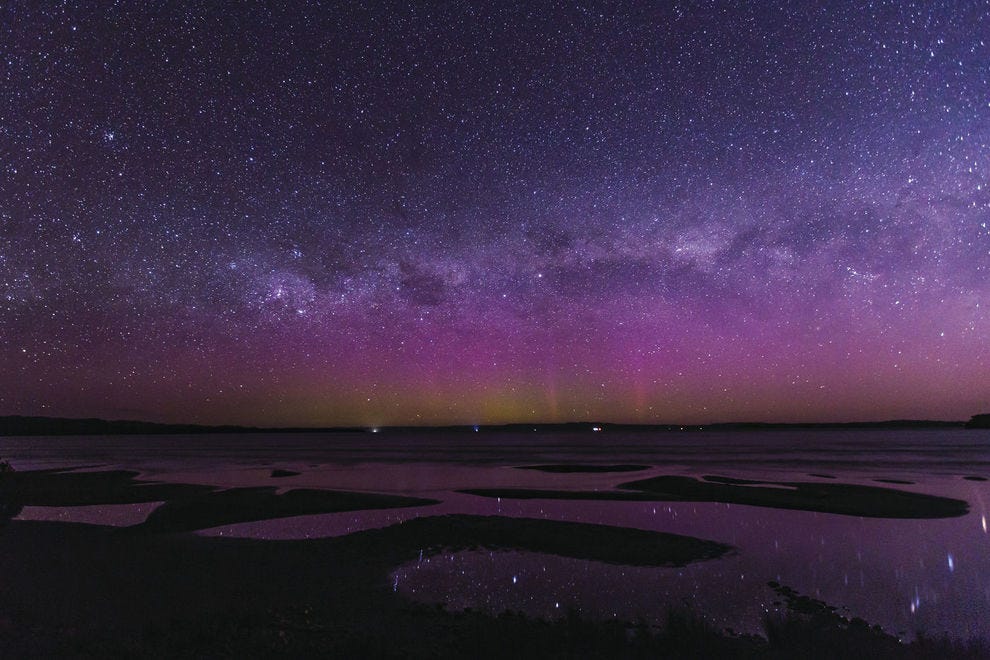 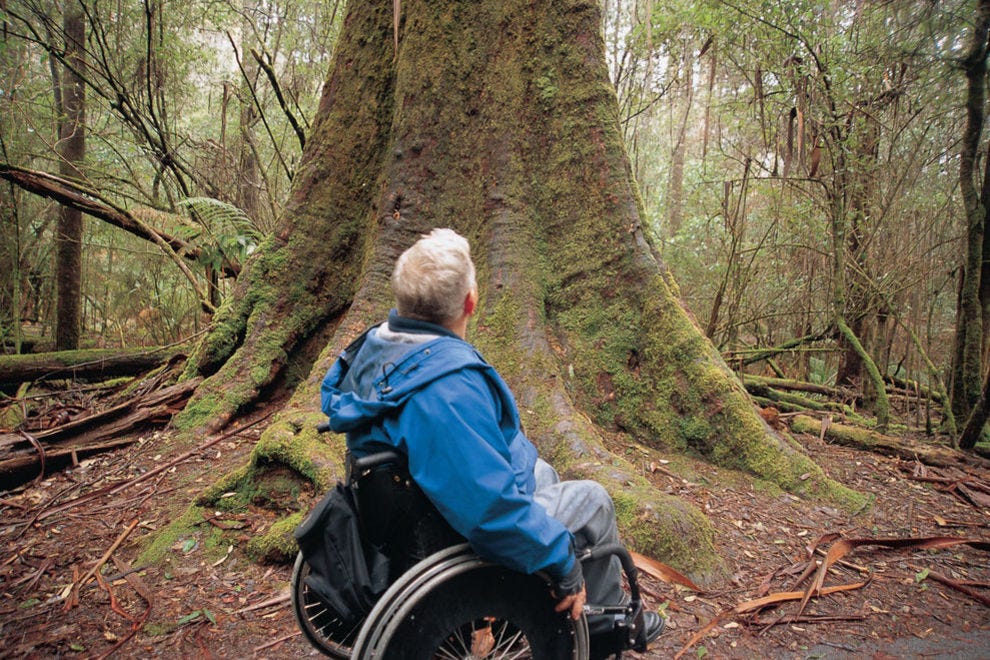 Mount Field National Park, located just an hour outside of Hobart, ranks among Tasmania’s oldest and most accessible national parks. Paths lead through forests and alpine meadows for the chance to see Russell Falls (the park’s most popular attraction) or the world’s tallest flowering plant, the giant swamp gum. 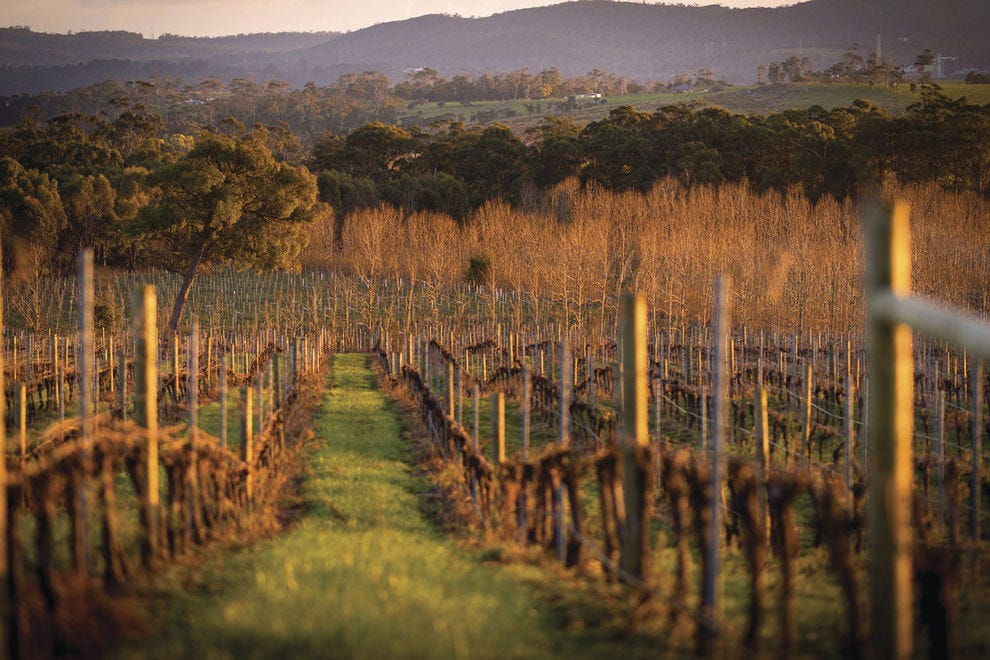 The Tamar River winds for 37 miles from Launceston to Bass Strait. Many consider the Tamar Valley to be one of Tasmania’s prettiest regions. It’s also the island’s most important wine-producing region, known for its cool-climate vineyards and sparkling wines. 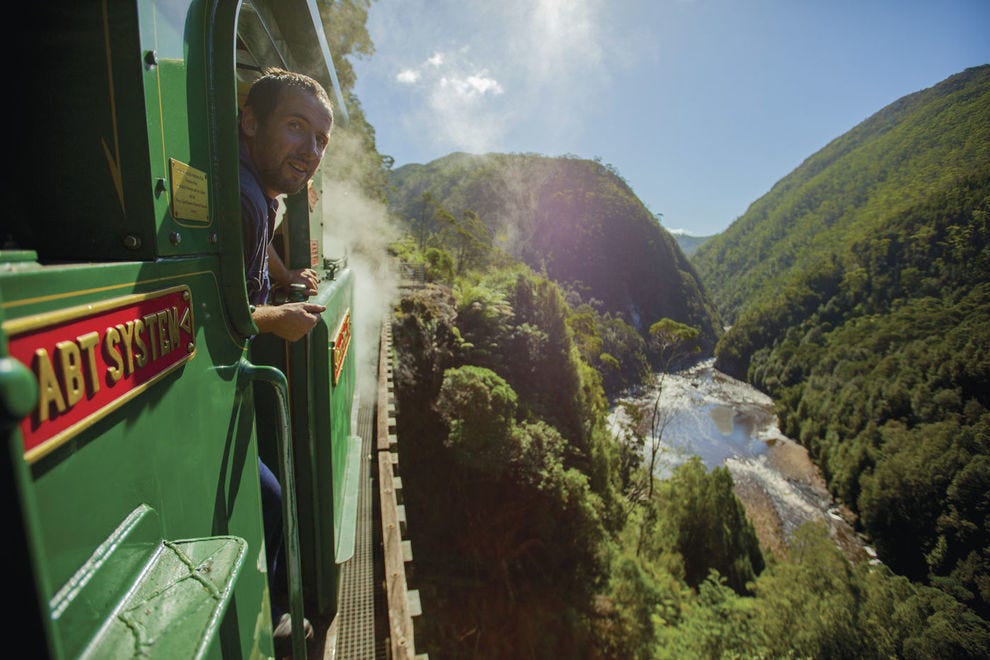 Train buffs will find the world’s steepest steam-operated railway in Tasmania. The West Coast Wilderness Railway takes passengers on a 10-mile journey through the Tasmanian wildlands aboard the same locomotives once used to move copper ore from Queenstown to the port of Strahan. 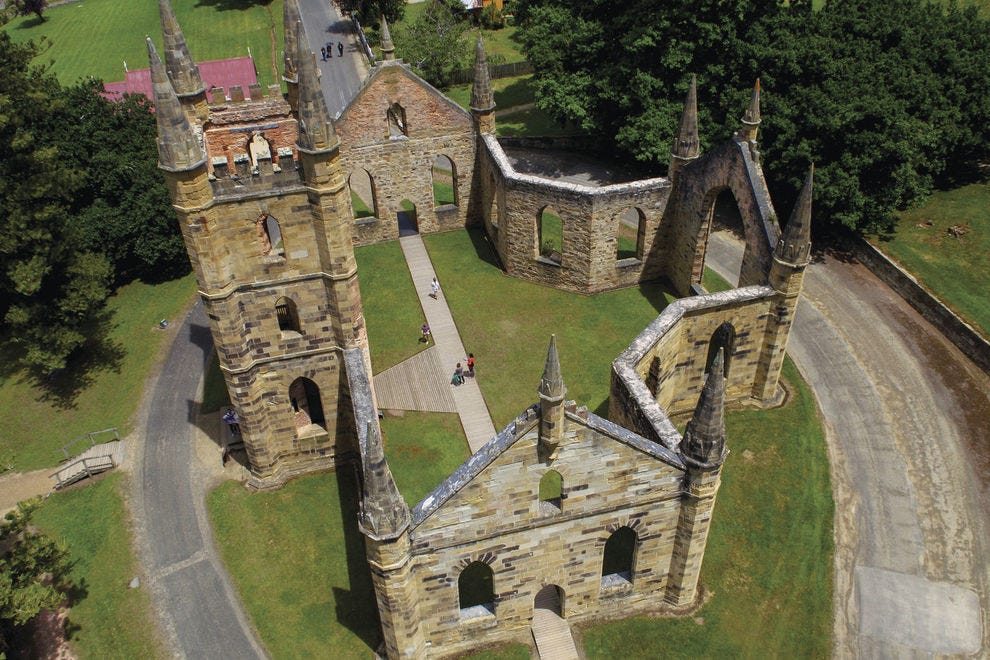 Port Arthur’s history dates back to 1830, when it was founded as a timber station. It’s better known, however, as a former penal colony where British criminals were sent in the years from 1833 to 1853. Today, the UNESCO World Heritage site is the most intact convict site in Australia, complete with more than 30 historic buildings. 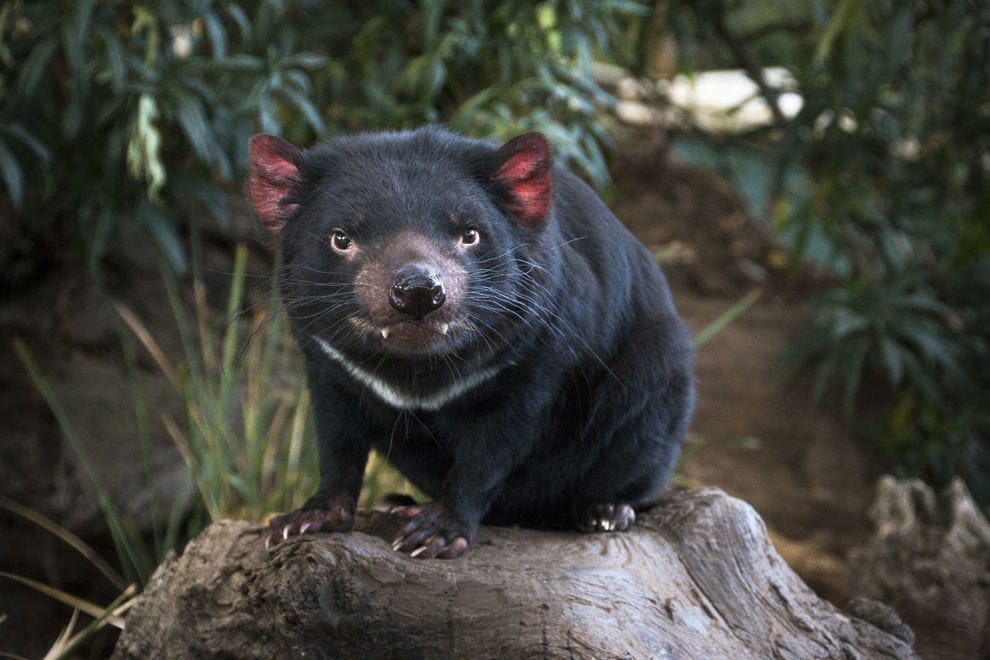 Wildlife is abundant in Tasmania, but perhaps no animal is quite as iconic to this region as a carnivorous marsupial known as the Tasmanian devil. You can often hear this endangered species at night, when they emerge from their burrows to hunt for insects, birds and small mammals.

It’s rare to spot the critters in the wild, but you can see them at the Bonorong Wildlife Sanctuary. 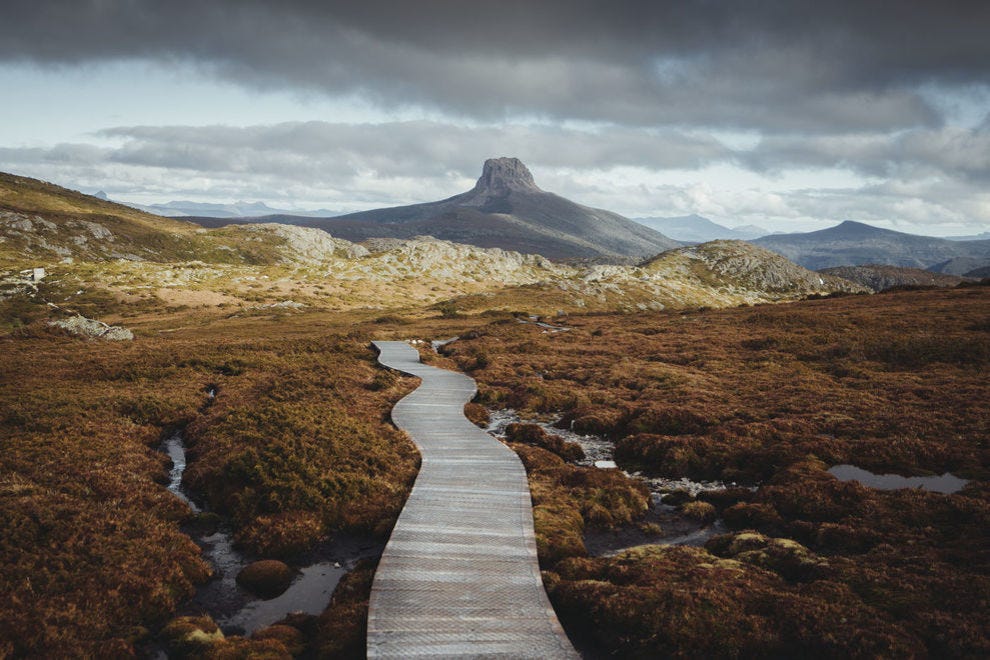 Tasmania has some of the best hiking on the planet. One of the most famous alpine hikes is the Overland Track from Cradle Mountain to Lake St. Clair. The 40-mile bushwalking track takes about six days to complete and attracts hikers from around the globe. 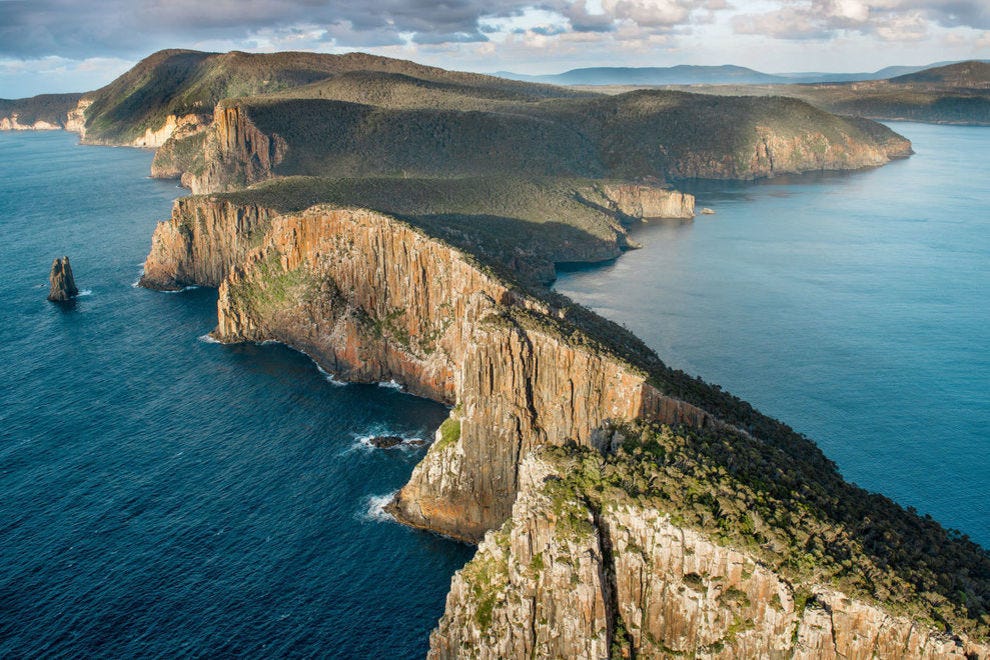 The Tasman Peninsula sets the scene for another of Tasmania’s popular multi-day walks, the Three Capes Track. This 30-mile track is best known for its outlooks along the clifftops of Cape Pillar, Cape Hauy and toward Cape Raoul. The walk typically takes four days to complete. 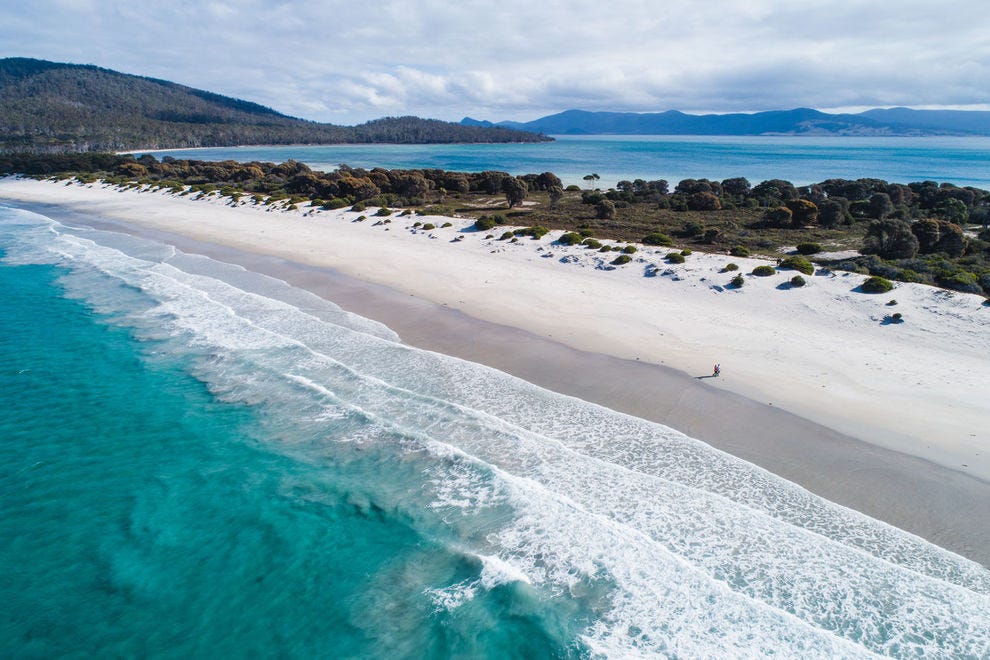 You’ll have to take a ferry to get to Maria Island, a wildlife sanctuary and national park off the east coast of Tasmania. What the island lacks in amenities, it makes up for in immense natural beauty, from white sand beaches (Ocean Beach pictured) to fern-filled forests. The azure waters off the coast are popular among snorkelers and divers. 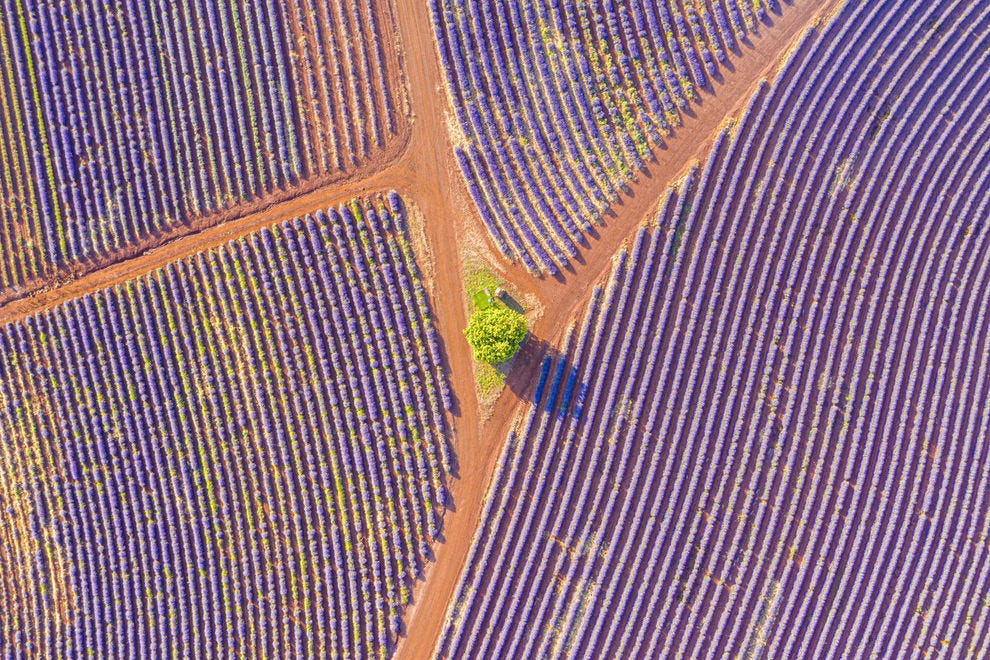 Some of the world’s best lavender oil, known for its relaxing fragrance, comes from the Bridestowe Lavender Estate in the north of Tasmania. Visitors can wander freely through the 260 acres of rolling lavender fields, take a tour to learn about how the oil is extracted, shop for lavender products or sample lavender-infused treats. 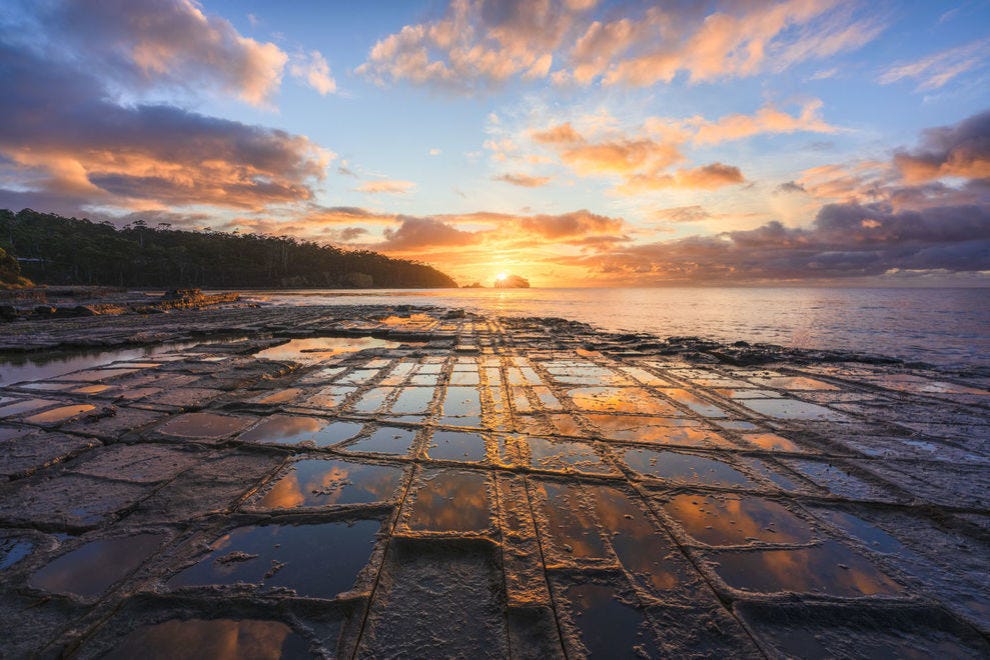 Tasman National Park protects the Tasman Peninsula in southwestern Tasmania. This park is known for its monumental coastal rock formations and towering sea cliffs. Among the highlights is the Tessellated Pavement, a flat rock surface fractured into rectangular shapes. 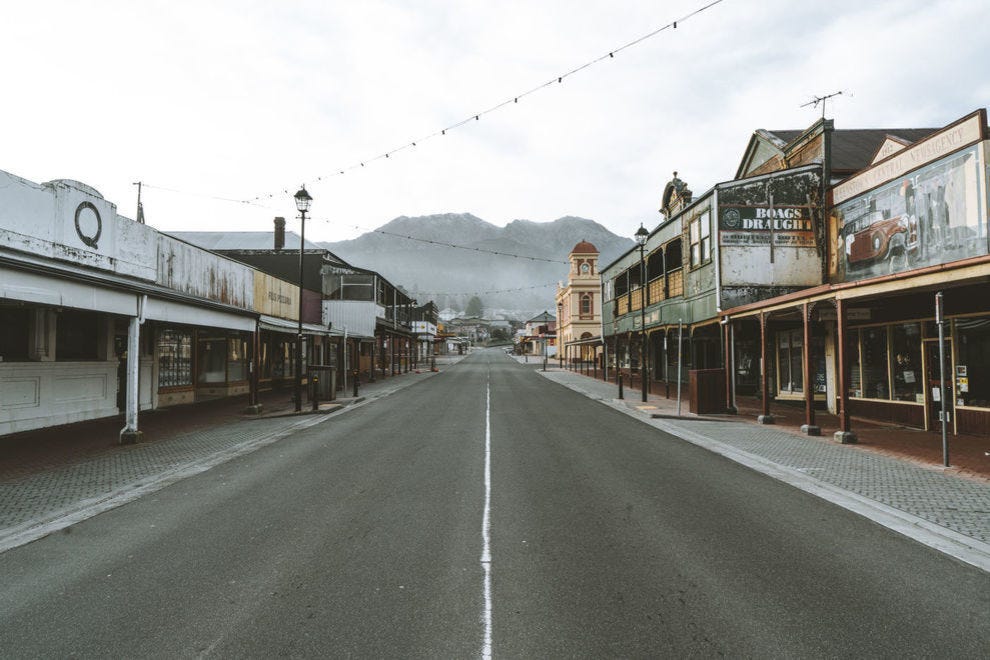 Queenstown serves as the gateway to Tasmania’s west coast. Queenstown was once one of the world’s richest copper mining towns, and that mining history remains. 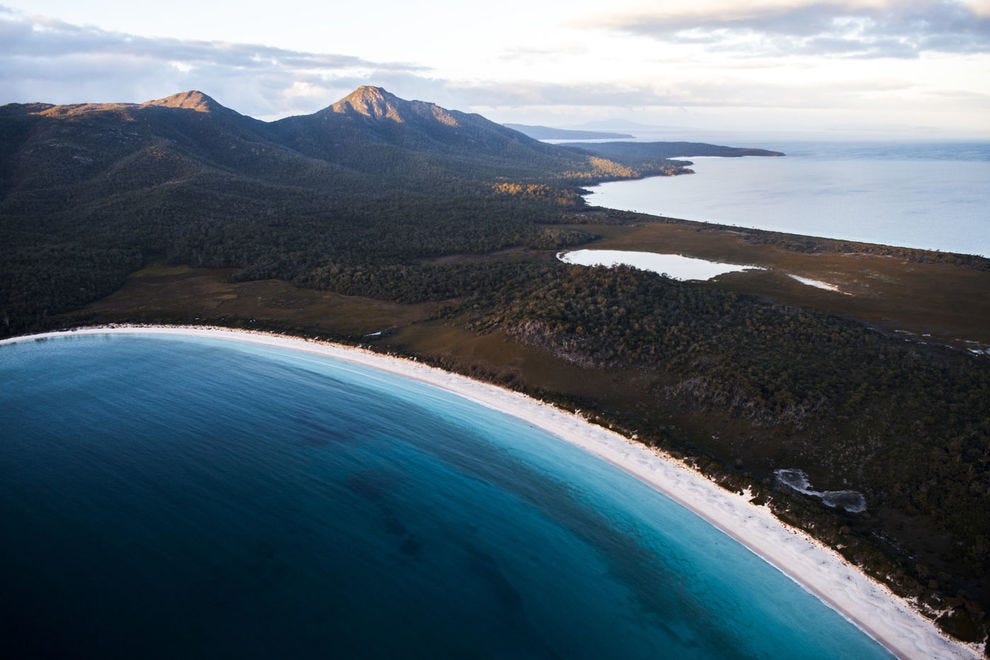 Freycinet National Park on the East Coast is one of Tasmania’s best known national parks. The three granite peaks of the Hazards stand watch over the Freycinet Peninsula and the iconic Wineglass Bay with its white sand beach. 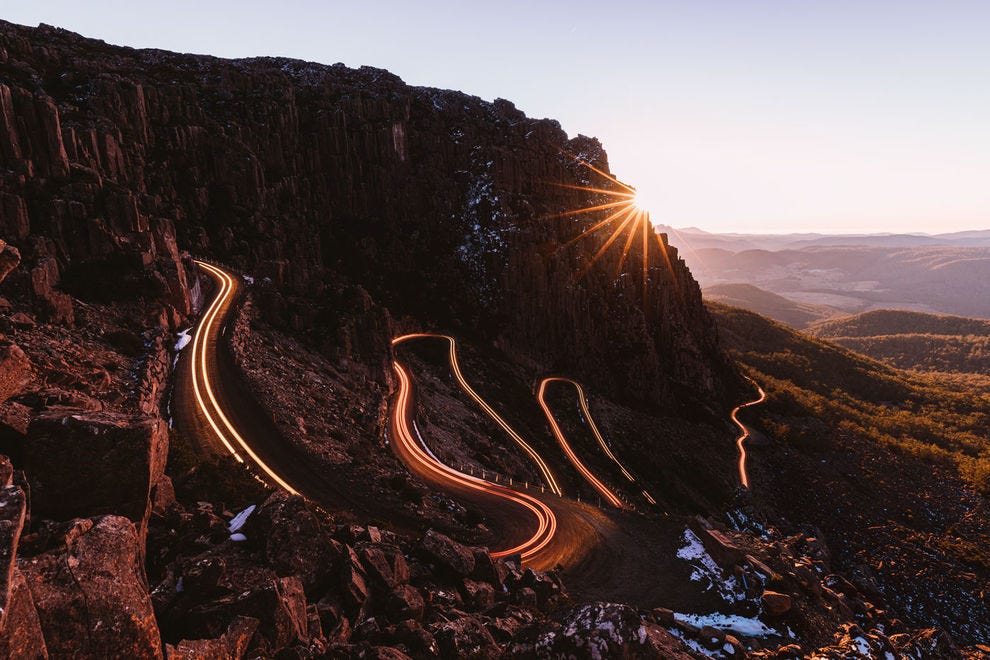 Ben Lomond National Park protects a stark, treeless alpine plateau – a major skiing destination in winter. A highlight of a visit to the park is the drive to the top of the plateau on Jacob’s Ladder. The series of hairpin turns zig-zagging up the mountain have served as a training ground for Tour de France cyclist Richie Porte. 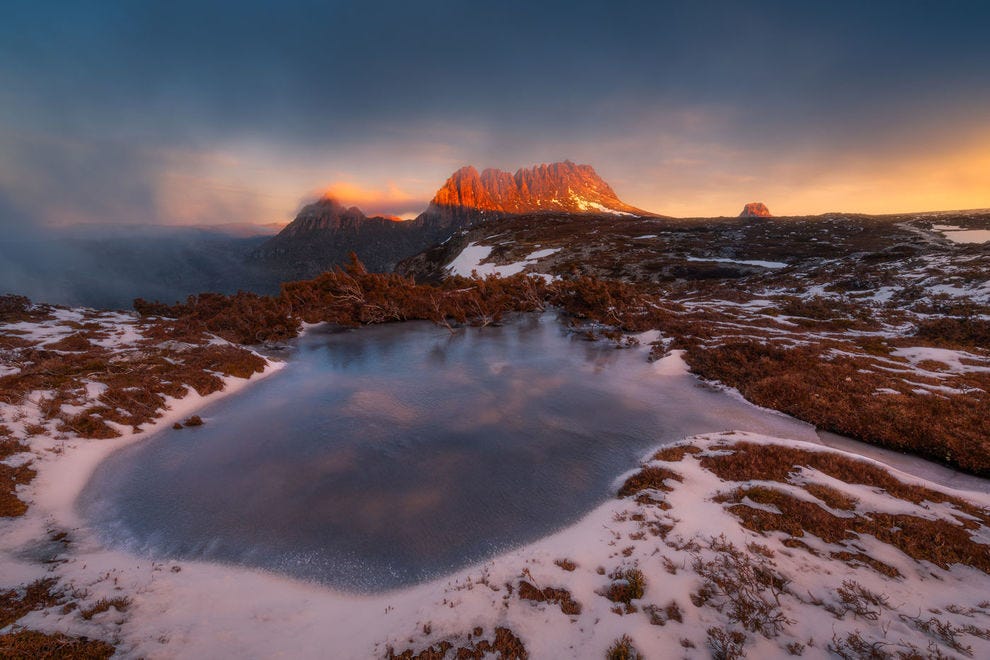 Cradle Mountain, located within Cradle Mountain-Lake St Clair National Park, is the starting point of the Overland Track and a popular destination on its own. The peak itself is surrounded by glacial lakes and alpine vegetation, all of which can be experienced via a series of short hikes. 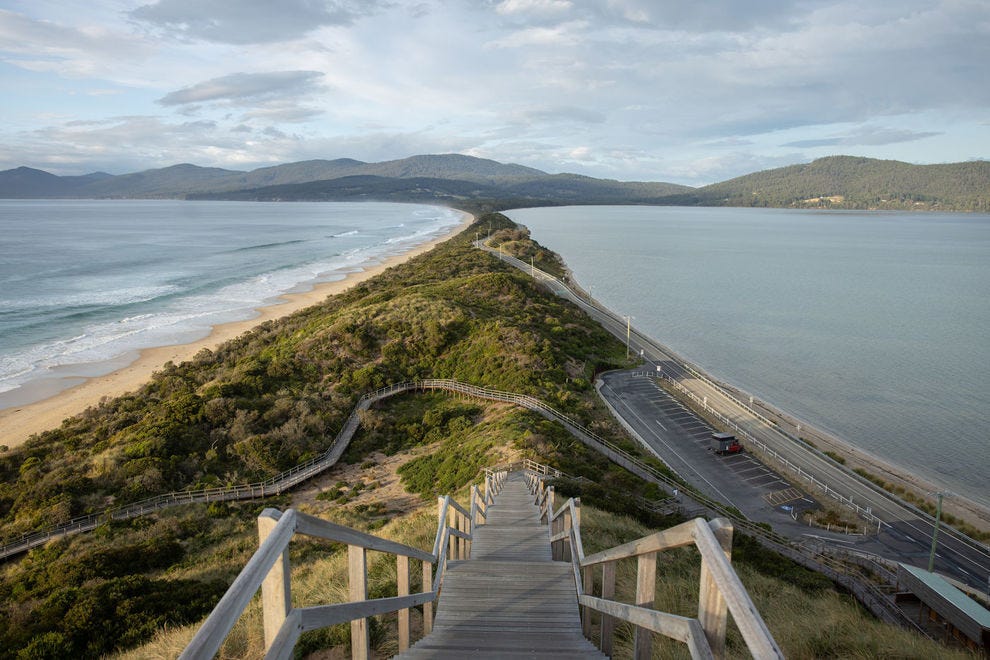 You’ll find one of Tasmania’s most Instagrammed spots on Bruny Island. The Neck is an isthmus of land connecting the north and south parts of the island and offering spectacular 360-degree views from the top. Keep an eye out for little penguins and short-tailed shearwaters. 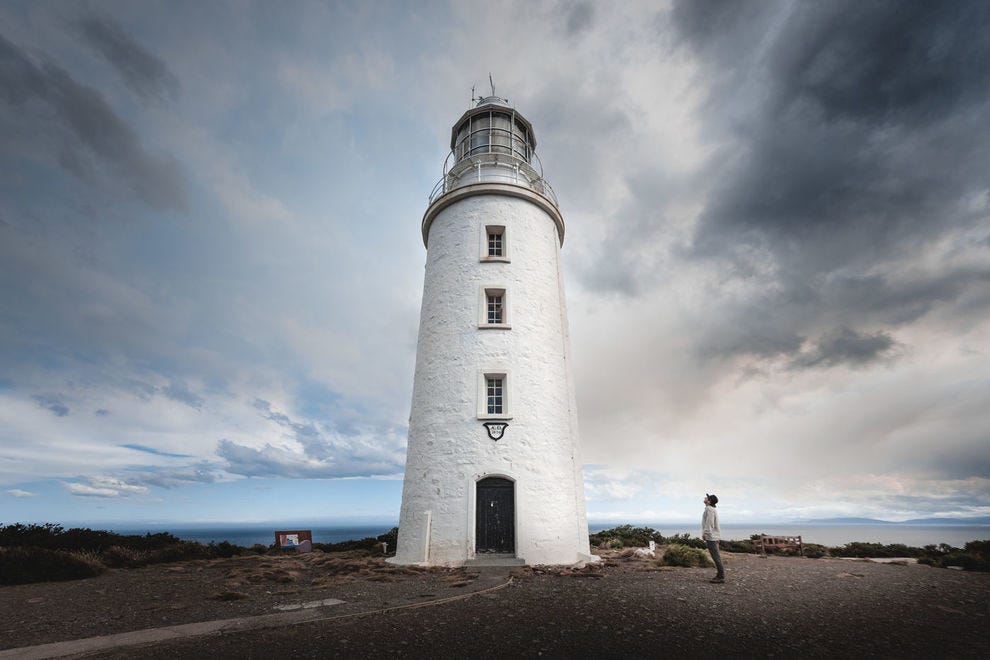 The Cape Bruny Lighthouse, the second oldest extant lighthouse in Australia, rises 374 feet above the southern tip of Bruny Island. Visitors can tour the lighthouse for views over the majestic South Bruny coastline. 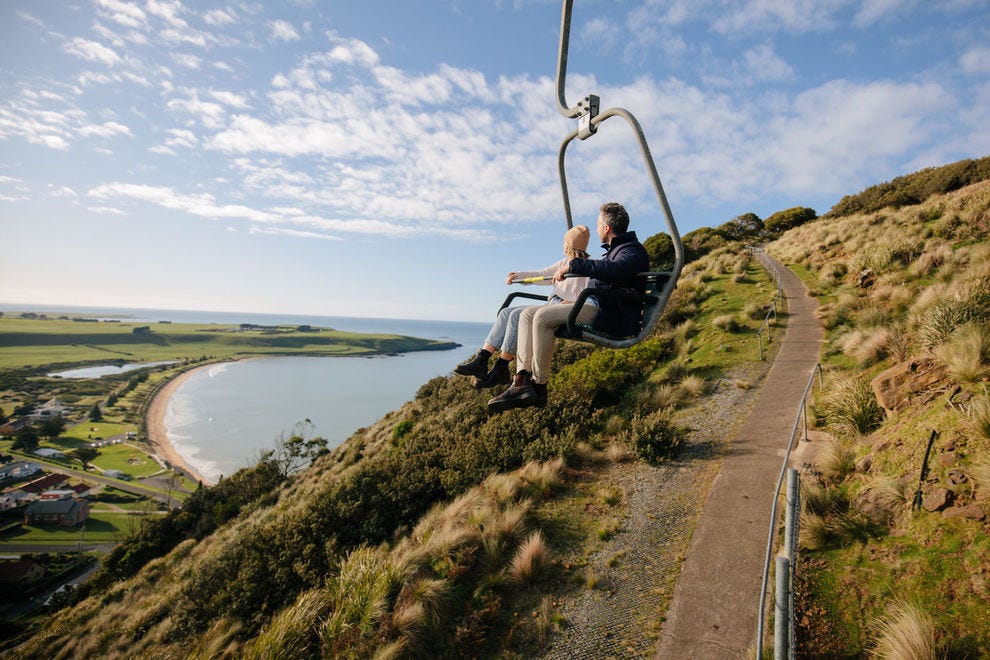 On the northwest coast of Tasmania, you’ll see a sheer-sided bluff rising above the fishing village of Stanley. This formation, known as the Nut, is a remnant of a volcanic plug. Visitors can walk or ride a chairlift to the top to enjoy the views across Bass Strait. 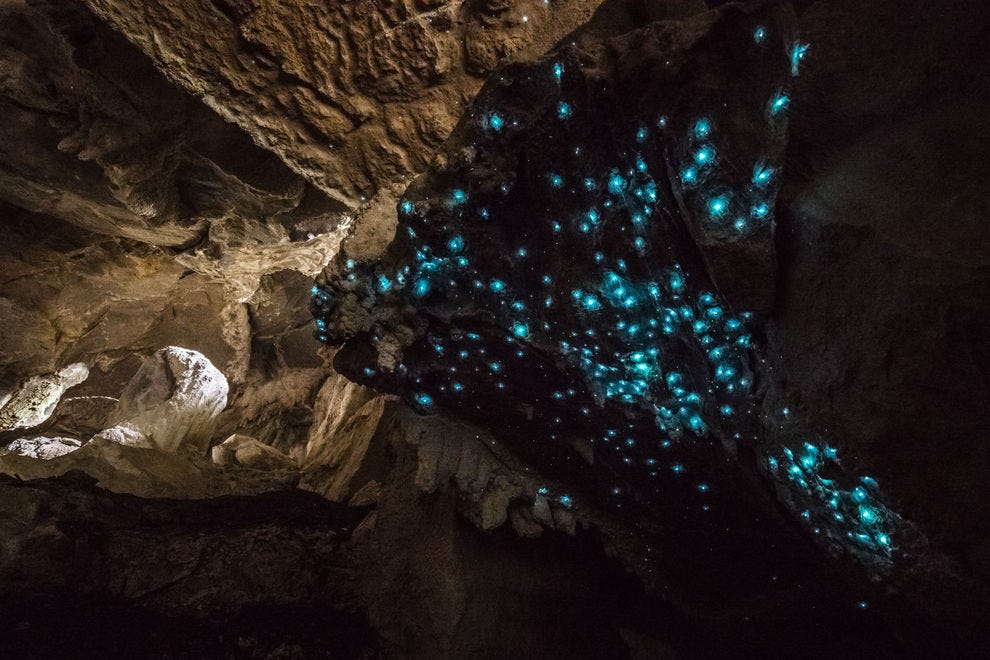 Many of Tasmania’s subterranean cave systems provide a habitat for some mighty magical little creatures: glowworms. These points of glowing blue light aren’t worms at all but hanging larvae of an insect endemic to Australia. 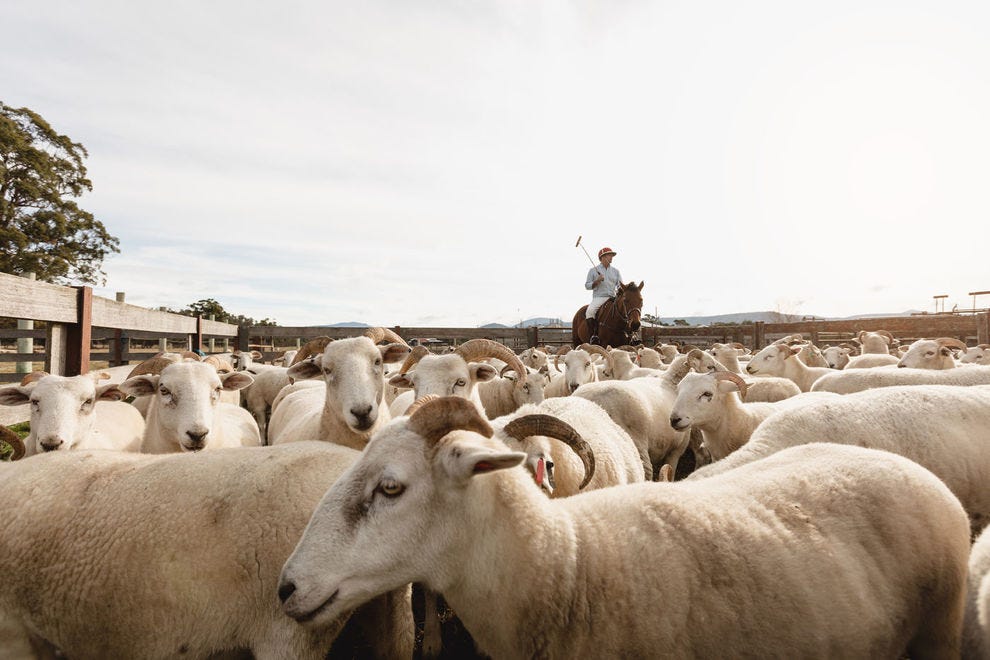 The culinary landscape in Tasmania is rich with local farms and food producers. The island is particularly well known for its cheeses – cheddars, camemberts, blues and bries made from cow, sheep or goat’s milk. Many farms offer farm stays, giving visitors a firsthand look at where their food comes from. 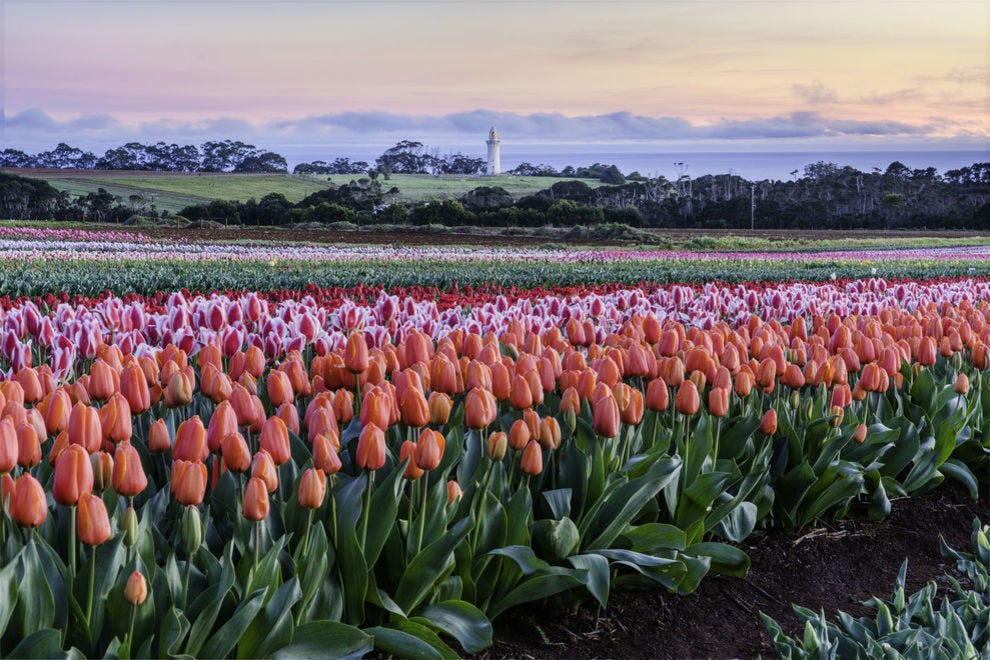 The end of September brings tulip season to Tasmania. These blooms grow so well in the volcanic soil of the Table Cape, in fact, that some of them are actually exported to the Netherlands. Wander through the flower fields at the Table Cape Tulip Farm or see them in bloom at the Royal Tasmanian Botanical Garden in Hobart. 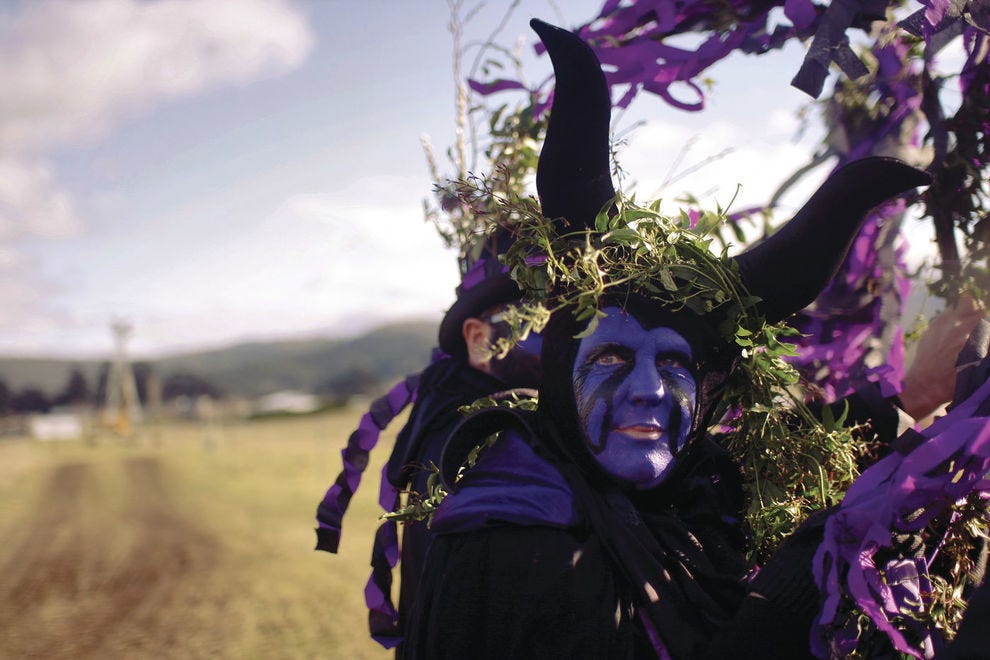 The Tasmanian calendar is filled with colorful events and festivals, and the Huon Valley Mid-Winter Festival ranks among the most unusual. The tradition is tied to the region’s apple growing history. Locals dress up and go wassailing – an English tradition meant to scare away bad luck and ensure a good apple harvest.

The three-day event includes plenty of food and drink (think cider), as well as an effigy burning.

This website uses cookies to improve your experience while you navigate through the website. Out of these cookies, the cookies that are categorized as necessary are stored on your browser as they are essential for the working of basic functionalities of the website. We also use third-party cookies that help us analyze and understand how you use this website. These cookies will be stored in your browser only with your consent. You also have the option to opt-out of these cookies. But opting out of some of these cookies may have an effect on your browsing experience.
Necessary Always Enabled
Necessary cookies are absolutely essential for the website to function properly. This category only includes cookies that ensures basic functionalities and security features of the website. These cookies do not store any personal information.
Non-necessary
Any cookies that may not be particularly necessary for the website to function and is used specifically to collect user personal data via analytics, ads, other embedded contents are termed as non-necessary cookies. It is mandatory to procure user consent prior to running these cookies on your website.
SAVE & ACCEPT